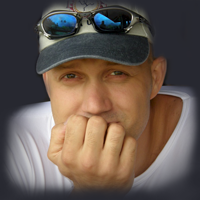 I’ve been writing my whole life. It was really the first thing that I wanted to do — other than being MacGyver. The first thing I remember writing was a choose-your-way sort of adventure. It had maybe six endings, and in five of them the main character died. Looking back, that was probably a sign.

Later, I studied English Literature and Creative Writing at Hope College, in Michigan. Everything from screenplays to poetry. But, for me, the real magic (no pun intended) was in the fantasy. The science fiction. The extraordinary made real, exercising every corner of the reader’s imagination. So that’s what I wrote.

And it was crap.

So I wrote more, and for the most part that was crap, too, but a little less so. As frustrating as that was, every once in a while… something happened — something right; something sparkly — and reminded me why there was nothing else I wanted to be doing. Eventually, the practice started to pay off. The sparkles happened more frequently, and closer together. The crap still crops up, for sure. I don’t think you get away from that no matter who you are, or how many blockbusters you’ve sold.

Those moments when things go right, though… Magic.

These days, my wife and I make our home in Michigan, near the shores of what locals call, with something of an aboriginal sensibility, “the Big Lake.” Also sharing our home are two small bipedal creatures who my wife and I did not have when we embarked on this voyage, but to whom I have grown very attached. I believe I will keep them. There are also two furry creatures who make like they own the place. They might be cats.